Instant Pot Chicken and Dumplings is a classic comfort food dinner made easy in your electric pressure cooker. If you’ve never had homemade chicken and dumplings you will love this recipe! It’s not complicated and there’s nothing better than tender juicy chicken with tender dumplings when you’re craving a cozy meal.

Chicken and dumplings might sound like a difficult recipe to make, but I can promise you it isn’t! It’s an old-fashioned recipe made with simple ingredients and it is so delicious.

Traditionally, it’s made on the stove in a pot but you can easily make it in an Instant Pot. The whole thing including the chicken, broth, vegetables and dumplings cook in the Instant Pot for an easy one-pot dinner you are going to love.

There are many variations of this classic dish but it’s normally a combination of chicken, vegetables like carrots, celery, peas and onions, a simple broth, and dumplings or thick dumpling noodles.

Some versions are more of a soup and others are more like a thicker gravy. My favorite way to make is more of a hearty chicken soup. There is some half and half in the broth that gives it a light creamy texture without being too thick and heavy.

What I like best about this chicken and dumplings instant pot recipe is that it’s more hands-off. The prep time is pretty quick and while it’s cooking you can walk away. You don’t have to stand at the stove watching and stirring.

There are several steps, but none of them are hard and the best part is that you won’t have a pile of dishes to deal with when you’re done. Everything cooks in the Instant Pot for easy clean-up.

Step 1: Sauté the Vegetables and Chicken

For the first step, you get to use the sauté feature on the IP. All you do is heat up the olive oil and then cook onions, carrots, and celery in it until they’ve softened.

Push the cooked veggies to one side of the pot and then place the chicken breasts in an even layer so they can brown on both sides. You don’t need to worry about cooking them all the way through at this point – you just need to sear them on both sides so they have a nice crust.

Once the chicken is browned, add the chicken broth and seasoning to the pot. Turn off the sauté setting and secure the lid. Close the steam vent and then set the timer to cook on high pressure for nine minutes.

It will take time for the pot to come to pressure and once it does let it pressure cook for the nine minutes. Once the timer goes off, allow the steam to release naturally for 10 minutes.

In the meantime, you can make the dough for the dumplings.

The dumplings I make are similar to biscuits, so start by mixing flour, baking powder, salt, and dried parsley in a mixing bowl.

Once you’ve mixed in the butter set the dumpling mixture aside.

Once the chicken and broth are done and the steam has released, open the Instant pot and transfer the chicken to a plate or cutting board. Using forks, shred it and then add it back to the broth.

For the dumpling dough, add the half and half and stir just until the dough comes together. You don’t want to overmix it because that will make your dumplings tough instead of tender.

I like to make the dumplings by scooping approximately one tablespoon of dough. Using a small cookie scoop makes this very easy. Scoop the dough and then drop it into the Instant Pot with the other ingredients.

Once you’ve added all of the dumplings, secure the lid and steam vent and cook on high pressure for four minutes. The dumplings will cook in the broth so, once it’s done, they’ll puff up and be so delicious!

When the timer goes off, do a quick release by (carefully!) opening the steam vent. Once all of the steam has released, remove the lid and add some half and half and peas. Give it a good stir and then turn on the warming option and let the soup stand for 10 minutes before serving it.

Ladle it into bowls and garnish each serving with fresh chopped parsley.

Can You Make Instant Pot Chicken and Dumplings Ahead?

Yes, you can definitely cook it ahead and keep it in the refrigerator to reheat later. It will keep well for up to three to four days.

You can also freeze it. Cool the chicken and dumplings completely and then store it in freezer-safe containers. It will keep for several months.

I hope you give this recipe a try – there’s a reason it’s considered a classic comfort food dish! It’s hearty, filling, and the flavorful chicken with the tender dumplings is so delicious. Make it on a chilly night – you will love it! 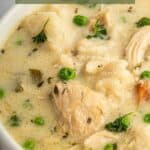 This is one of the ultimate comfort food dishes and with our twist, it’s easier than ever. Instant Pot Chicken and Dumplings is a simple dinner made in your electric pressure cooker.