'Tis the season for Apple Pie!

If you're looking for some easy and delicious APPLE PIE recipes, this is the list for you. These apple pie recipes are traditional, fun, and crazy!

Apple Pie lovers will love this list. Love caramel apple pie or crumb apple pie? Or maybe you want a non-traditional apple pie like an apple pie bomb or an apple pie in a jar? This apple pie recipe list has all the things you need to celebrate the season of apples!

PIN IT NOW TO SAVE FOR LATER

German Apple Pie by Barefeet In The Kitchen

Easy Apple Pie by Your Home Based Mom

Dorothy is a blogger over at CrazyforCrust.com, where she's been sharing recipes with a slice of life for almost 10 years. She's married to Mel, the other half of Easy Good Ideas, and together they are raising a teenager and dog in Northern California. 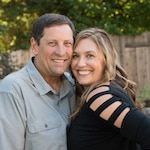 We firmly believe  that easy good ideas make GREAT meals. Here you'll find savory recipes made with simple ingredients so you can get dinner on the table - FAST.